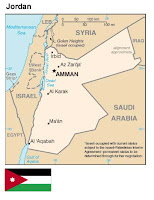 Late afternoon on Monday, after our dawn at Mt. Sinai, we crossed from Egypt into Jordan by way of Israel.

There’s a thin bit of Israel that separates the two countries so that meant that we left Egypt, a border crossing on foot, standing in the que for passport control and then walking to the Israeli border about 200 feet away.  At the Israeli border we entered another que while a kid in a polo, carrying an M16, kept guard.  There don’t seem to be any old people in Israel as every one of the guards and workers at this border seem to be under 25.

At the Israeli passport control the young man who looks 12 but must be 22 looks over my passport and then asks me, “Are you Jewish?”  My mind is flying a million miles a second (which is even more kilometres).  I’m trying to figure out, in the space of my inhale/exhale if this is a trick question of some sort.  I smile, “Um, no.”  “I have a friend in Jerusalem,” the young man explains, still looking at my passport, “his name is Metzger too.  You are sure you are not Jewish?”  “Pretty sure,” I say, feeling suddenly guilty about all the bacon I’ve eaten in my life.  He gives my passport one more look and then sends me through.

My travelling companion Greg is not so fortunate.  There’s just something about his last name apparently that earns him a special one on one chat at almost every border we cross on this trip.  Eventually he’s cleared to come with us.  It’s a long process for all of us just to cross this tiny border to get from Egypt and into Jordan.  After a wait by the sea our bus arrives to drive us from the Israeli border and on to the Jordanian border.  Too far to walk that late in the evening, we settle onto the bus for a brief ride.

At the border of Jordan we get out of the bus, get our luggage and start walking again.  And walking.  We pass a young woman at the gate who points us in one direction.  20 feet inside the gate a man points us in another.  MaryEllen, who I am convinced is so good at working things out that she could be the one who finally resolves the problems in the Middle East, gets things sorted for us.  First, passport control.

I step up to the window and hand the young woman, different from the one at the gate, my passport.  She looks at it a long time and then says something in Arabic, at least I think it was Arabic, to the person beside her.  They go back and forth for a few seconds and then she turns back to me.  “What is your name?” she asks.  “Um,” again trying to figure out what kind of sly trickery is involved, “Brian?”  I say it more of a question than a statement which was clearly the wrong way to respond.  “This picture does not look like you,” she says matter-of-factly.  I have no response to this.  What comes out is, “Um, uh, uhm, err…”  She does something to my passport, sticker, stamp, I’m not sure and then she hands it back and tells me to enjoy my stay.

Do I look better tonight?  Fatter, thinner, younger, older?  I open my passport and stare at my picture – which has to be without glasses.  Maybe it was the glasses.  Soon my passport is taken away with the rest of the groups for the next stage of processing while my bag undergoes another round of Xrays that should have me glowing by the end of this trip.

Still in the no-man’s land between entering the border and exiting the border crossing into Jordan we discover a conveniently located gift shop.  With many seats.  The night is humid and warm and we all take turns wandering through the souvenir shop.  When I go in I notice a pile of yellow rocks.  “Amber?” I asked the young guy in the shop.  “No, Frankincense.” He tells me.  “Look.” And he proceeds to set up a little heater and begins to melt this solid looking yellow stone down to a liquid that produces the most amazing fragrance.  This was not what I expected Frankincense to be like from the Christmas story.  I realize now that if I was Mary and Joseph, sharing space with the animals, I would’ve been more excited to see the Frankincense than I would’ve been the Gold.

I step back out of the shop a little while later and the young clerk follows me.  He spots Hillary, one of the young women in our group.  “Hey,” he says, “Are you travelling alone or are you with your father?”  “I’m with my husband!” she replies.  “Ah,” he says to her, “tell him he is a very lucky man.  Tell him I will give him 3000 camels for you.” which, in Jordan, is about the highest compliment and best offer you’ll ever get.  Later, when Shawn, Hillary’s husband arrives from passport control we tell him about the offer.  “Let’s see the camels first.” He says.

Eventually we were all cleared and we jumped on the bus for Aqaba and a night’s rest but not before the same clerk made a similar offer to Peter, who lead our group with MaryEllen, for Mandy, one of the single young women in our group.

The next day we would journey to Petra.  But we would begin the day with very sad news from home.

I've still got a lot to learn but travel is a great education if you keep your eyes open.
Posted by BrianM at 4:53 AM