Our day started at breakfast after a night of nausea that I won’t describe to you.  Just take my word for it, when they tell you not to eat certain things in Egypt, just don’t.  At my smallest – and yet most interesting – breakfast ever, I realized that right outside of the glass wall of our hotel restaurant was a spectacular view of the pyramids.  Slipping out I quickly snapped a few pictures and got back in time to load my backpack for the day. 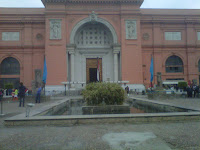 Heard about recent riots in Cairo?  Turns out they happened, with some occupiers still camped out, directly across the street.  The government building that was set on fire was right next to the Museum.  It’s blackened, burnt out corpse stared down us as we made our way in and out, testifying to the volatility of this amazing land.  Our guide, an archaeologist, later told us that when the riots were taking place and the fire burned, local archaeologists and other academics gathered at the Museum and formed a human chain around the facility to prevent rioters from getting in and destroying or stealing any of the antiquities.

The Museum is phenomenal.  It holds artefacts that span the ancient history of Cairo, Egypt.  I thought I knew some things about Cairo’s history but it turns out, not so much.  I’ve seen things today.  I’ve even seen dead people.  I could’ve stayed all day.  We were supposed to only stay 2 hours.  They ended up letting us stretch it to 3.  I was overwhelmed and didn’t know where to look first.  After running my hands over hieroglyphics carved into one sarcophagus after another I saw the giant sign that said, “It is forbidden to touch or lean on the antiquities.”  Oops.  Too late!  My fingers had traced the symbol for Horace several times by then – among other symbols – joining a chain of hands no doubt – extending my relationship with the objects all the way back to the original carver.

It would take weeks to walk through it all and weeks to tell you about all I saw in the few hours we were there.

Here’s the bad news.  You are not allowed to take pictures inside the Museum.  None.  Zero.  And they were watching both overtly and covertly, they had an eye on us.

Almost the last one to the bus, we pulled out and headed for lunch.  We drove down some crazy roads filled with crazy drivers and honking horns.  We returned to Giza (west side of the Nile – Cairo is on the east side) and pulled up to a restaurant that passing by on my own I would have taken for just another gap between buildings.  We walked back, past a huge BBQ pit with spits of whole chickens turning swiftly over hot coals, 3 women sitting by a brick oven making fresh pita bread and back into a garden filled with tables and chairs.  If you’re ever in Giza…

It was a four course meal: appetizers, more appetizers, main, dessert.  Our first appetizers: Egyptian cole slaw, pickled beets, marinated chunks of potato, white beans and babbaganoosh (sp?) with fresh pita bread.  Second round of apps: French fries (Egyptian fries?  Potatoes are a universal food!), round friend balls of meaty goodness, rice & meat wrapped in grape leaves.  The main: chunk of chicken just -  think Swiss Chalet only eating outdoors, in Giza, and incredible spices for melt in your mouth happiness.  Dessert: orange.  Don’t be underwhelmed by dessert.  This was the freshest, tastiest orange I’ve ever had.  It was the first orange I’ve ever had that actually tasted like orange, which makes no sense because, unless you’ve had one of these, you think like me that all oranges taste like orange.  They taste like oranges, this tasted like orange.  I think Martin Buber would understand.

After lunch, we headed to the Great Pyramid.  And I’ll have to save that story for another day.

I’ve got a lot to learn but there’s nothing like travel and meeting real people from another part of the world to get you educated.