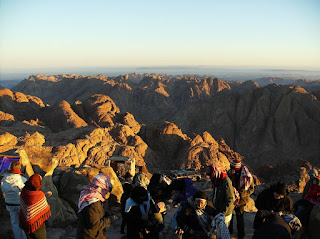 Got up at 1 am from a short sleep and freezing night.  Our little room sort of had heat but not enough to displace the chill in the air.  I went to bed with all my clothes on, plus a sweater.  After an hour I started to feel - I can't say 'warm' - not cold.

Our "wake up call" was someone pounding on our door telling us to get up.  My room mates and I quickly layered clothes and joined the crew heading to climb Sinai by moonlight. The goal: reach the summit by sunrise. We gathered for a drink to warm us up, tea or coffee.  Since I'm off both I had to pass and consoled my self with cold water.  A few people walked in and pulled out their $3 gloves that they'd haggled over at one of the on-site shops.  Someone kindly handed me a white knitted thing that went around my neck and could be pulled up over my ears to help with the freezing temps.

One lady in our group, recently turned 60, was determined to make the ascent to celebrate her birthday.

We travelled by bus to the main site and then started up on foot to where we'd meet up with our camel (if we were riding) and its handler.  Our guide, a Bedouin, spoke to a group of Bedouin men looking to be hired out for the climb.  In the midst of negotiations a fight broke out among the men and our guide had us move further up the path until they'd "finished negotiations".  The skirmish was over as quickly as it started and soon we were paired up with our camels.

With no experience on camel back before can I just tell you that mine had the tightest seat ever.  The thing in front on a horse's saddle (handle?) was much bigger and was matched on the back by another of the same size.  My butt squeezed in between the two and after some, um, adjustments, I felt ready to go.  The camel lifted up in a rocking motion and only then did I realize there were no stirrups.  My feet dangled at the camel's siees and pressure increased on certain, um, saddle areas that made ongoing 'adjustments' both necessary and challenging.

Despite all that, riding a camel in the dark under a spectacular view of the Milky Way up the side of Mt. Sinai in Egypt was cool.

The mostly full moon washed light over the valley as we started our climb.  Moonlight and starlight both illuminated our path and my eyes adjusted.  I prayed the camel's eyes had adjusted too.

I kept trying to find a more comfortable position. After we were on our way down on foot I saw how I should have been sitting with one leg crossed over in front of me slightly wrapped around the "handle".  Next time.

2 hours on a camel. No way to get down. My handler had long since let go of my camel and let him/her follow the path up and into the inky darkness.  Hearing sounds that I'd never heard before and feeling an occasional motivating slap on my camel's rump I was both amazed and a little scared.  I wanted to take a picture or have someone take a picture of me on my camel but I was simultaneously terrified the flash would spook the goofy beast and it would take off running into the night.  So I rode and I watched and tried to absorb the moment.  It really wasn't hard.

I looked up at the stars, more than I've ever seen before, and thought of Abraham and the promise God made to him once.  I was looking up into the same sky he looked up into when God told him, "Count the stars..." and promised him a legacy of a people and a land.  And one of those stars had been lit for me.

Then I was shaken out of my contemplation.  Sue, our 60 year old, wasn't feeling well. I couldn't stop my camel and she couldn't either.  I yelled back for him to help her and Angela behind us both did the same.  He heard, responded and took very good care of her. My camel, however, kept going on up on his/her own.  It didn't bother me a whole lot until it came to a fork in the path and I thought, "...well, this should be interesting." But in the dark, with no handler and no light but the stars my camel chose the right path.

Sue stretched, had some water and felt better. She got back on her camel and soon caught up with the handler slapping our camels to hurry along.  We got to the end of the camel path and then started into the hundreds - several hundreds - of rugged, rough hewn stone steps to the top of Sinai.

I walked with Sue. Slowly we made our way.  It was a blessing for me to have someone to take my time with on the steep climb.  This was a time to savour, a once in a lifetime moment and I was in no hurry to reach the top until it was time.  We stopped many times as we made our way up, sometimes resting in silence, sometimes chatting, sometimes making brief connections with others: German, Japanese, Italian – people from all over the world who were making the same journey we were.

We reached the final stop before summit just as day started to break. The colours of the sunrise were amazing as was the way the sunlight stretched across the mountains. The light of the breaking dawn revealed the faces of people of every race, creed, colour, and age were gathered on that mountain top.  Some stood silently.  Some snapped pictures.  Some sat in silent meditation.  Some chased each other around boulders.  Some chatted with travelling companions.  But no matter whom I made eye contact with it felt like there was a connection between us.  It felt safe.  It felt peaceful.

Eventually the moment was over.  There was no announcement, no bell or buzzer it just happened.  Someone started to descend and suddenly everyone was starting to descend.  And just like that, Babel.

On the mountaintop I was thinking of the children of Israel gathered on the plains below.  I thought of Moses on the mountain, how high did he have to climb? When did he know he'd climbed high enough? These hills, this vast empty space, this was the perfect place to gather a people to discover what relying on God and him alone would look like.  Barren. Beautiful. It calls you to solitary contemplation and drives you together to look out for each other.

And then we made our way down.  This time with no camels, we walked the whole way down.  It was different in the sunlight and in the heat that started climbing up even as we were climbing down.  At the base of the mountain all I wanted to do was go back to my little room and sleep.  An event can change your perspective.  It doesn’t take a mountain top but this one has done that for me.

I have a lot to learn and my teachers are Bedouins and boulders.
Posted by BrianM at 12:20 PM