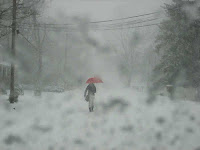 Or how my second journey for a Masters started…

I was just starting my packing on Tuesday when the phone rang.  It was Air Canada.  “How close are you to the airport?” the voice asked.  “Pretty close.” I said.  Anyone who lives in Charlottetown is ‘pretty close’ to the airport.  “See if you can get here within 30 minutes,” I froze, “we’re going to try to get you on the next flight because it looks like your scheduled flight later tonight is going to be cancelled because of this storm.”  The snow started falling the night before and it was getting deep.

As quickly as I could I through stuff into my two bags.  I wasn’t ready to go and the Elusive wasn’t ready for me to leave either.  But maybe this was grace.  Within a few minutes I was done – not sure that I had everything – but done.  We got in the car and made our way to the airport.  The roads were terrible.  At the airport I was told I was “probably” going to get on the plane.  Bag checked.  Boarding pass printed.  Go through security…

Say good-bye to family first.  Leaving was hard.  Leaving “suddenly” made it easier and harder all at the same time.

I went into the security area and started the security strip tease.  I walked through the metal detector and all was well until the guy at the scanner saw something he didn’t like.  And then I got searched.  Turns out my new travel toothbrush has the same silhouette on the x-ray as a box cutter.  A toothbrush specifically manufactured for travel with an airplane on the packaging looks exactly like a box cutter on their xray machine.  Sigh.

Finally I got to the next room and waited for my name to be called.  It was.  And I joined everyone else on the icy walk to the tiniest airplane I have ever flown on before.  It was like a model that you could put together at home.  The person who seated us was the co-pilot and I’m pretty sure had just gotten old enough for his voice to change.  With the cargo doors open you could see the outside from the inside where we were seated.  I was thinking, “I’m flying out in a storm in a model plane.”  But we did get off the ground and we did make the first leg of my flight that would eventually get me here to Boston.

The next morning I flew from Halifax to Montreal and then from Montreal to Boston.  One sure sign that I need to lose weight, I had to adjust the seat belt on every single flight, making it bigger, not smaller, for myself.  In Boston the hotel wouldn’t let me check in without my group or without M-E, one of our leaders, call Expedia to have them call the hotel to say it was o.k.  So I sat in the lobby and did some homework while I waited a few hours for their arrival.

And today is a new day and a new snow storm and the next step on the journey from here to there and back again.  The next time I blog, God willing, I will either be looking at the pyramids of Egypt or just back from the pyramids of Egypt.  And I’ll probably have adjusted two more seatbelts.  Today I am St. Brendan.

I’ve got a lot to learn and I’m glad I’m having fun doing it!

It’s not too late to contribute to “Educating Brian”.  My Masters goal is still out of reach without a little help from my friends!  The details of how to contribute are on the side thing to the right or you can click on the commercials on this page – every day – and that will help too – no purchase necessary.