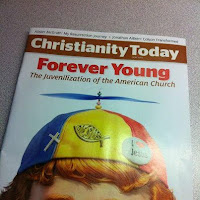 I’ve recently read a couple articles that have me thinking about perspective.  One involved a seemingly straightforward case of spiritual abuse.  It couldn’t have been clearer from the original article that a pastor was not only being a jerk but he was leading others to behave in a way that was completely opposite to the gospel.  And then, as Paul Harvey used to say on radio, the rest of the story.  Turns out the black and white original was really full of shades of grey and the lines were much blurrier than at first glance.  And I was reminded that our interpretation of information is often filtered through our preconceptions and prejudices.  In fact, usually we only see or hear the things that reinforce what we already believe.

The second article I came across made me wonder about my own ability, or lack thereof, to lay aside my prejudices and evaluate an idea.  The article was in Christianity Today and asked the loaded question, “When are we going to grow up?”  The “we” refers specifically to white, evangelical Christianity in North America.  The author, Thomas Bergler, argues that youth ministry over the last 40+ years has led to a present day juvenilization of American Christianity.  Bergler defines juvenilization for us in the article, “Juvenilization is the process by which the religious beliefs, practices, and developmental characteristics of adolescents become accepted as appropriate for adults.”  From there he launches into a critique of the contemporary evangelical church and insists that all the worse characteristics, the most immature of adolescence is true of the present day evangelical church.

Here’s where I issue some disclaimers, or at least tell on myself.  First, I’m no stranger to critiquing the contemporary church.  Second, I’ve invested the biggest part of my professional life, to date, in ministry with and to youth.  Third, I am rather partial to the emerging church – not emergent, which is a whole other animal, and I think reformation is an ongoing process not reserved exclusively for monks like Luther or intellectuals like Calvin.  Fourth and finally, given what I consider the earthiness of the Hebrew faith of which we are a part, I lean towards a more expressive, poetic and emotionally rich faith experience than the more “serious” one that Bergler seems keen for.

You can read the article here.  It’s long.  Take some time and come back and finish reading this later if you’re up for it.

Are there problems with the church today?  Absolutely.  Were there in the first century?  Absolutely.  Was Youth for Christ to blame?  Absolutely not.  Immaturity seems to be part of the process we pass through on our way to growing up.  At any given time I think a local church will be marked by the healthy mixture in its midst of believers across that spectrum of growing up into mature disciples.

Bergler, tracing the juvenilization of the church back to youth ministry of the 30s and 40s writes, “One mid-1940s teenage girl said, 'We just want to live our own lives. We're not in a hurry to grow up and get all serious and morbid like older people.' Of course, girls who just want to have fun make poor saviors of the world.”  Pulling a quote from a teenage girl in the 40s is hardly representative of all the teenagers following Jesus in the 40s or in any other decade.  But it is this attitude that Bergler suggests is prevalent in today’s evangelical church.  And he suggests it’s demonstrated in rock music worship and lyrics that sound like Jesus is our boyfriend.

I so thought the worship wars were over.

First, to equate rock music with immaturity staggers the mind.  I’ve always enjoyed a good Gregorian chant but is that more mature or grown up than rock music?  Bergler even goes after the volume at which the music is played as another sure sign of immaturity.  Arbitrary to say the least.  Perhaps he does better in the book but if this is an example of his reasoning and support of his thesis I’m completely confused why a book like this would get published today other than to appease the ultra-conservative market that would definitely line up to purchase this book.

Second, while I may not care for some of the lyrics of contemporary worship I can also make a list for you of some horrible hymn lyrics that fail massively both theologically as well as musically.  But let’s be fair, the Hebrew prophets definitely used the “God as our husband” motif and the New Testament writers didn’t shy away from “Jesus is our bridegroom” language.  Were either being immature?  Maybe.  But I think probably not.  I cringe by times at the empty lyrics that a popular new song contains or the lousy theology but isn’t this part of growing up?  Aren’t some of us always passing through our immaturity on our way to maturity?  Paul doesn’t suggest new Christians stop drinking milk, he just wants the mature Christians to move on from it.

As long as we have churches that give cars away to spike attendance we will have to own and accept that we have a great deal of immaturity in the church.  And in some churches the proportions are probably dangerously out of balance with the immature leading the way instead of the mature.  But the presence of the problem doesn’t support Bergler’s thesis.

This is just the article and not his book but I found it to be full of problems in content as well as bad reasoning.  I think it’s a shame to try to lay blame for positive reformations in the evangelical church rather than give recognition.  Youth for Christ and youth ministry in general has made and continues to make a positive contribution to helping young people grow up and mature into fully devoted followers of Christ.  I’ve seen more young people bring friends to Christ than I have adults, more go on missions trips and outreach and service projects than I have adults and more participate on spiritual retreats, camps and conferences in order to grow than I’ve ever seen evangelical adults.  Our problems may be real but I think they have more to do with embracing our culture than embracing our youth.

For more, check out Scot McKnight’s review of Bergler’s book which I wish I’d come across first!

I’ve got a lot to learn but I’m pretty sure blaming youth ministry for an immature church isn’t one of them.

And to prove I'm mature I didn't include a single reference to Thomas' older brother Ham in this entire post.
Posted by BrianM at 8:03 AM