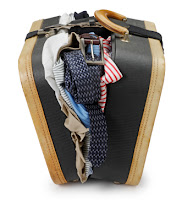 I've been getting info emails for my upcoming module.  Working towards a Masters at SSU means hitting the road not just hitting the books.  The emails are giving me details on what to pack and what not to pack for our upcoming trip to Egypt, Israel and Jordan.

Ever since the last module though I've been neck deep in packing and unpacking.

To go to SSU meant digging in to the baggage I already carried.  Fears, expectation, hopes, more fears, prejudices and fears, some rolling around in dark places I didn't want to open.  Then reading a pile of books: some that comforted, some that irritated and some that have left a permanent mark.  Conversations in and out of class that continued the emptying process while day long lectures crammed in more than I could process.

You know that crazy announcement at the airport about not leaving bags unattended and not accepting bags from someone else?  It applies to educating Brian as well.

One afternoon session I had taken note after note and just as I was getting my head around one idea the Prof tossed out another and another and another.  It was all I could do to get them in the suitcase like a barrage of socks and underwear, "I know I'm going to need this later...".  And then, arriving home, I've been surprised over the last several weeks as I've unpacked those bags to discover stuff I didn't know I'd packed.

Stuff pilgrimages are made of.

I'm still unpacking though and I'm supposed to be in serious re-packing mode now.

I've got 10 books and 10 papers due in a couple weeks.  Each book so far, and I've barely scratched the surface, has caused me to start sorting out my baggage yet again.

Hemingway once wrote, "If you are lucky enough to have lived in Paris as a young man, then wherever you go for the rest of your life, it stays with you, for Paris is a moveable feast."  Yeah, it's mixing metaphors but a single module at SSU has become a moveable feast for me.  It's an experience of unlearning, unpacking, grasping some things and letting go of others.  I'm not so young but it's a meal I'm glad to finally be getting down to.

So tonight I sit here blogging, sitting on my metaphorical suitcase and hoping to get the zipper closed on this one before I move on to the next.  I don't think it can be done.  Partly that's my fault because I keep pulling out souvenirs and mementos from this first module to share with people I love.  As soon as I get something out I notice something knew about it and off I go again digging through the rest of the suitcase.

Packing and unpacking is work and I usually end up forgetting something important but today I'm grateful that my bags aren't empty and this journey, this pilgrimage, just keeps getting more exciting.

I've got a lot to learn but today I know I'm getting there.

Hey, if you think it's worth your while, please say a pray for Educating Brian.  Peace.
Posted by BrianM at 4:47 PM