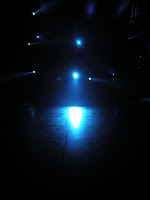 One of the books that we read for our module was The Story of Christianity by Justo L. Gonzalez.  It was fascinating reading and it will spawn no end of blog posts.  Our reading for this module covered the Reformation to present day.  So many things have occurred to me as I read the pages of The Story but all now fit inside the framework of a picture that one of my fellow students described in class one day.

Dan, who could tell it better if he was here, saw himself, guitar case in hand, making his way into a great concert hall.  From a distance he could hear the music that was being played inside.  At once it touched his soul and compelled him to enter.  As he came into the hall he saw the band, made up of young and old, men and women, every tribe and every nation, each one playing instruments - some indigenous- all playing one song.

He approached the band, put down his guitar case, opened it and brought out his guitar and he began to play.  He joined the Song.  It had been going before he arrived but he jumped right in and added something that hadn't been there before.  While he played, some musicians would stop, pack up their instrument and step off the stage and into the darkness beyond the spotlights.  Their moment was over but the Song continued on, richer for the contribution that they had made, closer than ever to the Finale.

And then Dan's part was over and he stopped playing.  Others had arrived and joined in the Song and he felt satisfied and  complete.  There was no sadness or regret as he packed up his guitar and, like those others before him, quietly slipped off the stage and back into that night.  As he stepped into the Mystery he was reassured by the Song that continued without him but of which he knew he would always be a part.  He would forever be part of that Song and that Song would forever be a part of him.

That picture has come to me again and again as I think about my own life, what I'm doing or not doing here on this big, blue Stage and where I go from here.  I've thought about it in the context of Church History and how the "great players" seem so seldom to have been aware how the new movement they'd introduced with their little lives - triangle players to the tubas - had impacted the overall piece and those who heard it.  I'm encouraged and liberated by the knowledge that I don't have to write an original piece, I'm not the Composer.  Whether I play the notes as written or add a little improvisation what matters when it's all been said and done, is that I played.  I played with heart, with passion and I was faithful to the Song and to my fellow players.

I've wanted to share that with you for a while now.  Dan told me at the module I was welcome to share it.  Remember, no one who's part of a band can ever be called a failure - triangles or tubas.
Posted by BrianM at 11:13 AM