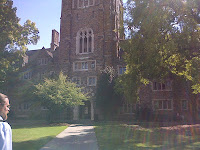 Sunday night and for most of the day on Monday, I was privileged to take in “The Bible in the Public Square” at Duke University.  It was sponsored by the Duke Center for Jewish Studies as well as the Duke Religion Department.  And it was free.  My friend Michael invited me along and got me there and processed the content with me in between sessions.  This was Sabbath time for me.  I felt refreshed and re-energized by an environment and friend who encouraged deep thinking, challenged my preconceptions and offered alternative views I had never considered.

The first session was with Jacques Berlinerblau from Georgetown University.  His topic was “The Bible in the Presidential elections of 2012, 2008, 2004 and the Collapse of American Secularism.”  One of the big ideas he left me thinking about is the multiplicity of people, groups and institutions that claim the message of the Bible for their own agenda.  In short, the Bible, unlike, say, the Koran, has more claims staked on it than the average sacred writings.  Not the least of which are the political parties.  Both sides of the American political aisle use the Text to advance their cause and fuel their rhetoric in, what Berlinerblau called, a “cite and run” (no exegesis) approach.  And it left me wondering, still, how often we, who make a primary claim on the Text, are doing exactly the same sort of “cite and run” – or else why would believers so willingly accept the horrible misappropriations and misleading applications that nearly every politician makes of the Text of the Bible?

I’ll also say that Berlinerblau is one of the funniest academics I’ve ever listened to and it was great to sit beside someone like Michael who laughed at the same stuff that made me laugh.

Monday morning we heard Adele Reinhartz (University of Ottawa – go Senators!) on “Then as Now: Old Testament Epics and American Identity.”  She did a brilliant presentation on how the Exodus story was manhandled by Cecil B. (but not alone) and turned into American propaganda against the evil, red horde of communism.  Using film clips from the Ten Commandments, Reinhartz vividly demonstrated that the filmmaker(s) turned Moses into the new Jesus that not only included significant changes or additions to the biblical narrative but closes cinematically just before the credits roll with Moses misquoting scripture and assuming the pose of the Statue of Liberty on Mt. Nebo.  There were other significant elements from even more recent retellings of this epic that make it clear that the American story has become firmly entrenched in the Exodus account in modern U.S. psyches.

Reinhartz led nicely into David Stowe (Michigan State) who presented on “Babylon Revisited: Psalm 137 as America’s First Protest Song.”  The continuing theme, American popular culture loves to find itself in the biblical Text and has never been afraid to disregard context for content.  He ended with a clip from Mad Men and the anachronistic cover of Don MacLean’s “Babylon.”

Late morning was David Morgan (Duke), who presented, “The Bible as Image in American Visual Culture.”  One take away for me: the Bible, the physical book is a potent symbol and has been so in the American conscious – separate from its actual content – for hundreds of years.  It has been a status symbol in the early days of print, a tool of intimidation, a sign of literacy and of course, piety.  What does the physical presence of the Bible represent to our culture today?  I saw on TV Sunday night that it’s fodder for a new game show.  What does the physical presence of a Bible speak to our culture today?

Ruben Dupetuis (Trinity University) presented on “Translating the Bible into Pictures: Comic-Book Bibles and the Politics of Interpretation.”  He quoted one of my favourite Comic book creators (yes, I have favourites) and referenced an online version of the Bible that I recently came across in print (thanks Lisa!) that blew my mind – a lego block version full of graphic violence and sexual images.  Yes, you read that right.  He asked some interesting questions about how presenting the Text visually requires translation choices that advance our own agendas – consciously or unconsciously.  He had me thinking about how I read the Text out loud and the inflection I use in my voice, particularly reading dialogue or a monologue and how the choices I make about emphasis or accent or inflection is really, in effect, me translating the English text as I read.  That might seem like a small thing but it reminded me of Bonhoeffer’s directions in “Life Together” that the public reading of Scripture should be done without done in a monotone fashion.  I thought he was crazy.  Now I’m thinking he was self-aware.

And the last session we took in was on The Bible and America’s Founding Era.  The first talk was by John Fea (Messiah College), “Does America Have a Biblical Heritage?”  From a historical perspective Fea concludes that it most definitely does.  But he points out that this is not the same question as, “Does America Have a Christian Heritage?”  And that’s an important distinction.  The Bible is stamped all over our American Heritage but the use of the Bible does not mean that it was understood or applied with a Jesus Hermeneutic.  Quotations by Amercian Founding Fathers makes it clear that there is a “yawning abyss” (favourite expression of the conference) between these two questions.  It could be argued that in the same way that the apostle Paul quoted a Cretan poet to make his point, the founding fathers quoted the biblical Text to make their own.

Shalom Goldman (Duke) spoke on “God’s American Israel: Hebrew, the Bible and the American Imagination.”  He pointed out that there were Hebrew schools in the United States before there were any Hebrews (or very few) in the U.S.  America has had a complex relationship with Israel since the country was founded that continues to become more complex.  In some ways the U.S. has loved Israel as the first Promised Land while seeing itself as the second.   It was fascinating to see how teaching the Hebrew language was a key ingredient in the Protestants who first settled this country and the schools, like Yale, that were first founded here.  Goldman quoted the first president of Yale who assured his students that Hebrew was vital to learn as it was the language we would all speak in heaven and he was certain to see them all there.

We left the conference at that point, my head full, my heart wondering.

How much have we, the descendants of the community to whom the Text was written, put the sacred into the hands of the profane in order to further or own desire for power and recognition?  How has our own misuse of the Scripture as textbook, answer guide and potent quotables led to the eager misappropriation of the Bible in the public square?  How cheaply have we sold our birthright and how culpable are we for its misuse?
Posted by BrianM at 8:43 AM